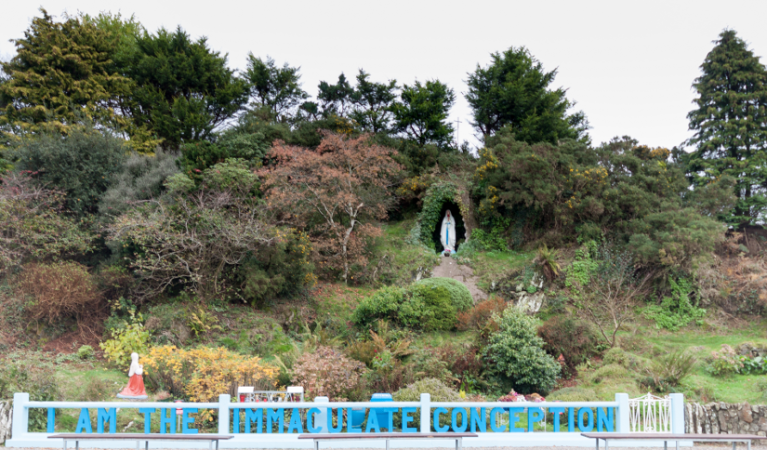 There could be nothing more Ireland in the eighties than the incident at Ballinspittle, County Cork, where a statue of the Holy Virgin Mary, Mother of God, was said to have moved of its own accord. Nobody had multi-channel in those days, so there wasn’t a moment’s hesitation. My parents bundled up the five kids and we drove for more than an hour. We all sat on a hill waiting to see a holy vision, like hundreds of other pilgrims replete with hang sangwidges, bockles of orange and picnic blankets.

Let me tell you, if you’re five years old and you stare at anything for a whole minute (let alone several hours) you will think it’s waving at you. You will hallucinate out of sheer boredom and suggestibility. The Wikipedia page says Many visitors claimed to have observed the spontaneous movements. The Catholic Clergy in Ireland maintained a neutral stance in regard to the authenticity of the claims. I don’t know anything about the original claims, but I think when I was there the only witnesses were young children (myself included). The statue was a cheap babysitter and a cheap day out. The rumour was probably started by a local shopkeeper to sell more bockles of orange and rosary beads. It was like something from an episode of Father Ted.

It’s amazing I turned out so well adjusted, when you consider I believed such silly nonsense. You see, I was raised in a country where a fanatical cult run by hypocritical monsters shielded and facilitated paedophilia and other abuse for decades. That kind of dawned on me (and everyone) in the nineties. That was the last real decade of the rosary bead (though the old folks still carry on the old ways). I’m not nostalgic for a time when Catholicism had such a hold on people’s minds in Ireland. But I could murder a bockle of orange. Just to get a sense of what it was like to be Irish and Catholic in the eighties, you should just stare at the image below for at least a couple of hours. Give it a try.

Most of GIVE ME A SINE was composed and arranged in a virtual space, utilising sound synthesis, sampling, and heavy processing.

Inanimate objects and abstract concepts become totemic symbols on a vision quest, as the disembodied artist searches for his humanity in the guts of the machine that has swallowed him, and all of us, whole.

Heavily processed musical noise art.
This is my revenge.